I first learned about “Occupy Wall Street” a few days before it started.

It sprung up as a collection of people angry about the economy, but was steadfastly without a driving purpose from the start.  My initial thought was: with no actual message, this is bound to go sideways.  And really, that’s all it has done: go sideways.  The few protestors that have shown up — a few thousand total across several cities — have, left to their own AdBuster’s-inspired devices…well, they’ve gone sideways.

The overriding theme seems to be this: we are here because we are jealous.

Now I’ll stop to be clear: crony capitalism is an anathema to productive society.  The idea that government should choose winners and losers in any capacity — from GM to Solyandra — is a reprehensible thing.  Government should play no role in subsidizing businesses through bailouts or tax breaks or any other form of favoritism.  And inasmuch, I can agree with a certain amount of the anger inherent in these “Occupy” protests.

But I am a very long way from being convinced that this is the message these protests are about. 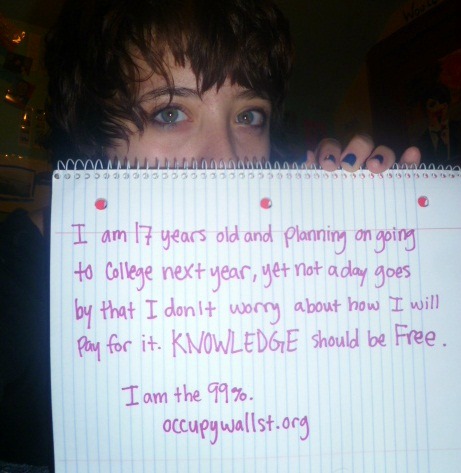 I'm looking forward to plunging head-first into massive amounts of debt and then complaining about it. I am the 99%.

Even the most cursory glance through the tumblr blog suggests that this is largely a movement made up of 20-somethings who want nothing to do with the reality of the decisions they’ve made.  College loans seem to be the chief concern.

And in this is the reason why I contend that jealousy is at the center of this whole thing.  College loans are an entirely voluntary thing.  The choice between taking on tens or hundreds of thousands of dollars in loans to study what you want at the best possible college vs. not going to college at all is a false choice.  Without really much brainstorming, the actual choices include (but are not limited to):

The list, I’m sure, goes on.  Suffice it to say, there is literally no one forcing anyone at gunpoint to attend a college which is beyond their means, to study any major they want, no matter how dismal the outlook.

Choosing to live outside your means is exactly that: a choice.

I’m not talking about unforeseen medical bills.  At one point in my life, I chose to go without health insurance and wound up in the hospital, needing surgery, with $37 in my bank account.  And despite all of my own personal poor decisions that led to that moment, I can still come away from that experience understanding just how much some people will always need a safety net.

But let’s be real: this is not about a safety net.

This is about protesting the very idea that educations cost money.  This is largely a 20-something crowd who is tired of paying back loans for a service they have already received.  And that…that doesn’t sit well with me.

Education is overpriced.  But not because education is an industry.  Government decided more people should be able to go to college and guaranteed loans; people took out more loans; colleges responded to increased demand with increased prices.

In other words, Occupying Wall Street to force government to provide a solution for a problem that government created is the very definition of a protest gone sideways.

But it’s more than that, because there’s a sizable amount of free will involved here.  Government may have created a bubble, but it didn’t force anyone to buy something they didn’t want.

Government has a legitimate role to play in helping the truly downtrodden.

Helping childish people live out their childish fantasies isn’t one of them.