They’re also usually retardiculous.  This week’s meme being passed along on Facebook coincided with Obama’s speech attempted to justify, well, doing nothing ever:

Remember when teachers, public employees, Planned Parenthood, and PBS crashed the stock market, wiped out half of our 401Ks, took trillions in TARP money, spilled oil in the Gulf of Mexico, gave themselves billions in bonuses, and paid no taxes? Yeah, me neither. 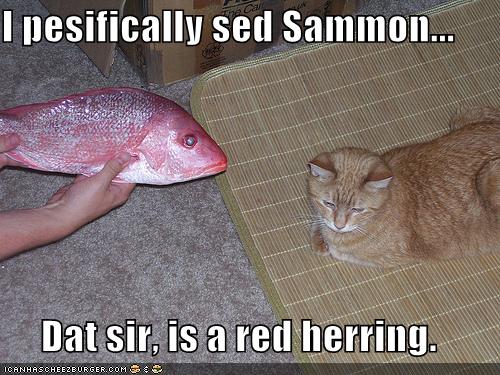 It’s difficult to know where to begin in even processing this. The whiplash that I feel from the misdirection of the red herring? The ridiculous appeal to emotion? The fact that there are actually people who noddingly agree with and pass along a statement that barely makes an argument and never approaches making sense?

Truthfully, the biggest question in my head is: so?

Public employee pensions may not have caused the economic downturn, but the deficits they’re causing sure aren’t helping the recovery.

Planned parenthood and PBS didn’t create TARP, cause the downturn or spill oil in the gulf, but they are a symptom of the same disease: a bloated federal government.

We are out of money. Fighting to keep the status quo, whether in a stupid Facebook post or by marching on Madison, is a losing battle. Doing that fighting through incoherent memes and red herrings and emotional appeals and all manner of logical fallacies just compounds the problem because we’re now in a place where sarcastic questions with implied arguments passed around on Facebook are what passes for discussion.

The state isn’t magical. It can’t spend us into prosperity. And it can’t not change its spending habits and somehow eliminate our crushing and unsustainable debt and deficits.

Dumb Facebook posts are one thing. Snotty, bootlicking, state-worshiping, economically illiterate attempts to demonize any attempt to change the status quo are another thing entirely.

C’mon people. Facebook is annoying enough without terrible political arguments. Get your act together.